To celebrate Halloween, I'll write about my own ghosts. I've had 2 houses that were haunted or had spirits residing. But, 1st The story of my nephew jesse. When he was about 3 years old, he was outside playing. He came in the house all animated saying that he was talking to "ouhy". "well where's "oughy now" ? his mom asked. "Well, he's here but, not here and he's crying and he's broken", as he's pointing to his for arm," I told him he didn't belong here." "i told him to go away. "
My sister in-law then realized something, something she had'nt thought of in years. She had a brother that killed himself at the age of 15, he hung himself. but, weeks before he died he had a compound fracture in his forarm. His name was "hughy"
coicidence? i think not.
Posted by cconz at 7:41 PM 1 comment: 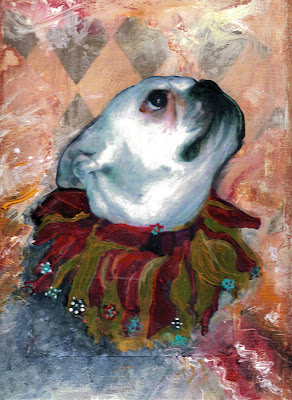 Another painting of my favorite subject. "my boy jimi"
Posted by cconz at 3:23 AM 1 comment:

The beginning of the month brought with it "What Cheer flea market. It's a large flea market that happens 3 times a year. It's located in southern Iowa. I was walking around scoping out all the goodies when i over hear a loud mouthed guy. He was spewing out alot of Crap. He was dragging along alittle girl about 7 or 8 years old. "Those gaddamn demacrates", they wannana put a gaddamn n----r in the white house, spewing hate and ignorance. Going on and on, Then to top it off i hear him say " gaddamned drive all the way up here and they ain't got no guns, I wanna buy some guns"
i really wanted to say something, but, thought he probably would love alittle confrontation. He wasn't worth it. But, the really sad thing about it all was his little girl. Walking behind him, her hair hanging in front of her face. looking to the ground. She' probably a sexually abused by her disturbing dad. A guy like that, my assumption is probably accurate. What chance in hell is she going to have. A bigot and a sex abuse victim.

I live in my little small town, near a larger city that is culturally diverse and a great art community. People are educated and i don't see much bigotry.It's there, i know but, it's not the majority. What scares me is, How many people out there are like that guy. I fear for Obama, if he's elected. McCain and Palin just feed that hate and negativity. I don't think they even realize what kind people they are attracting. The bottom feeders don't get out much. But, there Coming out from under the rocks for this election.
Posted by cconz at 2:34 AM 1 comment: 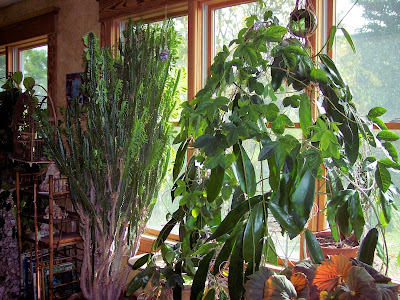 I love old vintage victorian wire flower stands. This one is a dandy. It has a wire trellis right on the stand. It's perfect for hoyas and my passion flower to wind and curl around every thing. I'm not sure of the name of my hoya but, the leaves are huge. Big bannana leaves. I'm hooked. When it's loaded with blooms, the whole sunroom smells wonderful.
Posted by cconz at 2:43 PM 2 comments: 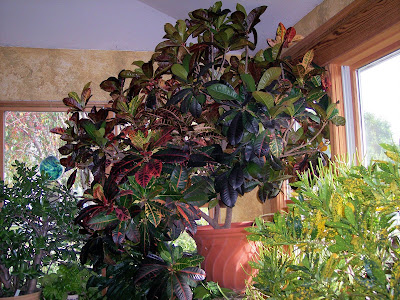 My Croton has been with us for 24 years. Our old (now deseased neighbors) gave it to us as a housewarming present. I've hauled it in and out every year. It's about the size of a mid-sized shrub. Thank goodness for light weight pots.
Posted by cconz at 2:37 PM No comments: 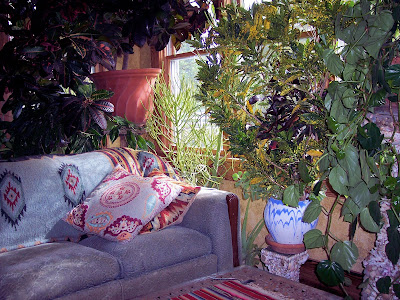 I love to sit out here or lay on the couch out in my sunny room and read. Sitting out there and be surrounded by green leafy plants. I love it. It makes me feel good.
Posted by cconz at 2:32 PM 1 comment:

Well, i finally got a jump on fall. i hauled in almost all my houseplants before i had to. i now can put them where i want them, and have a place to sit out in my sun room. It's very hard for me to part with plants. But, i managed to get rid of some this year. Duplicates, i had 2 of many plants, so the extras found a new home."Wanted: Plant lovers, plants to Good homes only." I've always had plants in my life. My room as a kid was filled with plants and my mom had magnificent specimen plants.I like trying new things. I just got a clivia. i hope it does well.Hoyas are my newest passion. They do well anywhere. they have glorious smelling blooms. Begonias were a fav for awhile, but my sun room was to cool in the winter. I had 40 different varieties.
Posted by cconz at 2:04 PM No comments: 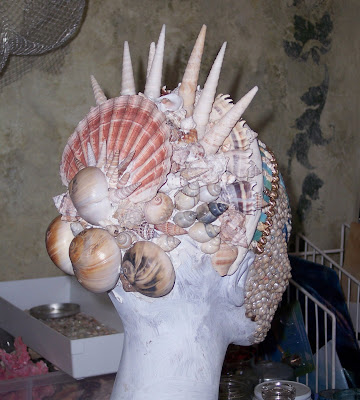 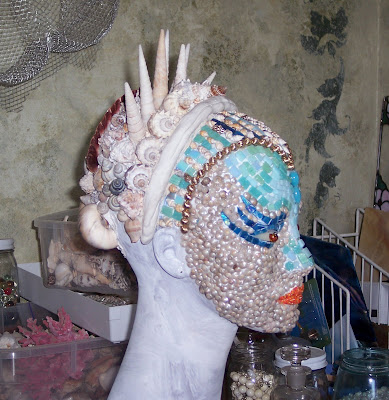 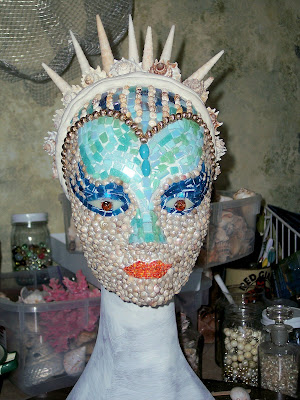 Wow, i've been working on this a little while and i'm finially making some head way. I'm making it for my friend jared. She reminds me of a las vegas showgirl. I was going to cover it with beads ,but figured that would take years instead of months.So, part glass and a few beads and the rest shells. Shells are fun to work with because there are so many different kinds.So hang on jared it's almost done.
Posted by cconz at 12:46 PM 1 comment:

Well, i have been off line for about a week. I went nuts not able to get on the computer. My computer crashed. Then my water bed sprung a leak, water leaking thru the floor and down thru the light fixtures and into the kitchen. then the kitchen faucet sprung a major leak and the dryer stopped working. all in 1 week!!!I was afraid to leave the house. What could happen would happen.
My good friend laura, started a blog with my encouragement. She is an incredible artist and i wanted her to show the world her talents. please check her out and give her some words of encouragement. please click Fairy wings in my fav blogs list
Posted by cconz at 2:41 PM 5 comments: