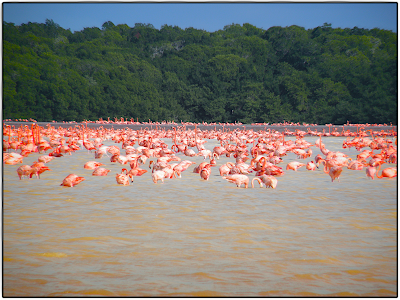 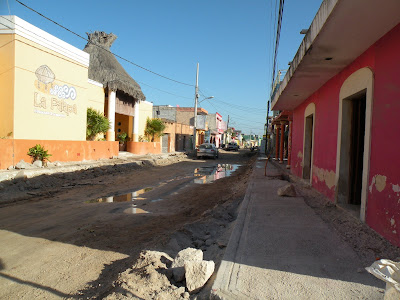 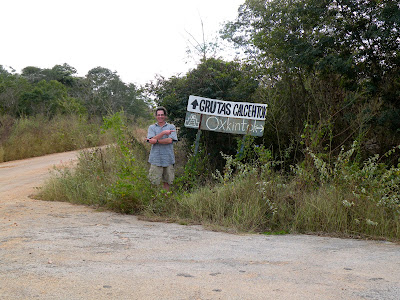 Everyday we would head out. We would see literally hundreds of men/boys riding bikes with big baskets attached. The bikes were leg powered or some would have motors and a canopy attached. They'd be parked along the busy roads wandering the ditches looking for wood, hunting for the food for the day. If people in the states think they got it bad, come here. These people are poor. They are also happy, friendly.Guadeloupe was being honored while we were there, shrines were everywhere. It was pretty cool. The picture i took of a particular one has a spirit coming from it. (or at least it looks like its does.)
We walked along streets and could see people living in these buildings with no doors or glass in the windows. Some with no roofs or thatched roofs. One room dwellings with cows and chickens living right in there with them. The women of the house cooks the food and washes the clothes with a big kettle in the middle of the room over a wood fire. Men gather and hunt, the women cook. and do it all over the next day. That's their existence. It's different from what we are used to, but, who's to say it's bad.

We decided to go to Celestune for the day to see the Flamingos. We rounded up a fellow with a boat and were waiting to see if other people would show up, to make it a little cheaper. I was sitting in a bar a while bill went out for a smoke. About 10 min. passed and he comes running in all excited , grinning from ear to ear." You'll never believe who i ran into , She's coming in to meet you". I'm at a loss. In walked a women, Cathie, this is Cindy and she lives here. She speaks ENGLISH!!! (You have to understand, bill and i have been talking very little to any one but, ourselves). Cindy was very very nice and gave us a lot of advice and a name of a hotel to stay at., if we wanted to stay an extra day. Cindy had a story, but, i have a feeling it wasn't the story she was telling us. She had a face like a road map. A little ruff around the edges. She said she was an artist. I do believe it may have started out that way.
We Found out that she moved there 20 years ago. Bill and i were saying "oh, how wonderful it would be to Quit your job and do what you love to do." Her comment was " You do what you NEED to do." I really liked Cindy a lot. I wish i could have talked to her more. We had agreed to meet later that night, but she never showed. I think she needed to turn some tricks. sad, but a reality.
We saw the flamingos and what an incredible site. The horizon was hot pink. We were able to get pretty close. We really loved this little fishing town and stayed a night. Highly recommend this place. TO BE CONTINUED....
Posted by cconz at 10:13 AM

cc,
Well, if the last picture is an indication of the time you crazy kids were having, I’d say you were having a lot of fun, lol. Is the shrine in front a home, or is it a place of worship? And what is the old saying, “Just another Flamingo in the garden of life”, lol, wonderful. – gary

Perfect timing to be there for the Feast day of Our Lady of Guadeloupe. I am SO ENJOYING seeing and hearing about
your vacation. More, more, more!!!

Gary, The shrine was at someone's house. I felt odd and uncomfortable taking pics of people's homes.

Gayle, The shrines were everywhere. It was very beautiful!

Nobody makes friends like you two do, two of my favorite people, so glad you are home safe, but it would be nice to just DROP OUT, wouldn't it!