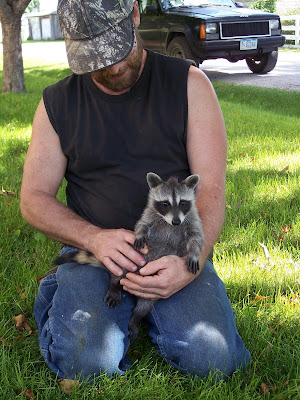 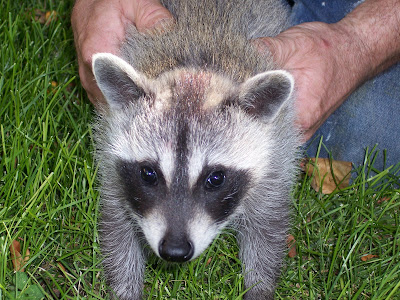 We have a friend named Doug, He lives in a commercial building in lone tree(mayberry)in the top level.He also has family farm, that he frequents for firewood or mushrooms or arrowheads. what ever the season. On one of his farm visits he found a baby squirrel. He named her Suzie, She had free run of his place, raised on walnuts and a wide variety of foods. she turned out to be a great little pet. but, she had access to the out side whenever she wanted, she goes out and has raised 2 litters of babies (in the apartment), when they are old enough she hauls them outside and shows them the ropes. Doug never see the babies once the are outside and she won't let them back in.that's her roost they have to find there own place. It's the craziest thing. she's been around now for going on 3 years. She's got the best of both worlds.
this year he found a baby raccoon. eyes still shut. He take little Ralf every where he goes. sits on his shoulder. He follows Doug around like a dog. He also has free run of his place. He goes in a cat box and sleeps with Doug.He's never caged. He will never be. When ever he poops in the cat box he runs over to a tub of water and washes his hands,every time.
Posted by cconz at 10:57 PM

What a cute raccoon!!

Isn't he just the cutest...Ralf, what a hoot. I once raised a baby squirrel, named her Liz, now I don't really know if it was a he or a she, didn't care at age 10, that was the last thing on my mind...know what I mean...

How gorgeous, we dont have racoons in Australia He looks a cheeky, mischeivious thing... What a beautiful man he is to care for them.

I love these guys but how does the Whisperer get so close? I have a raccoon family living in my neighborhood and every once in a while see one walking behind my garage or someplace - after a really bad storm one morning, the baby was crying so lowdly she woke me up - she was trying to find her parents and I guess she did because she calmed down and it got very quiet again! Kartika