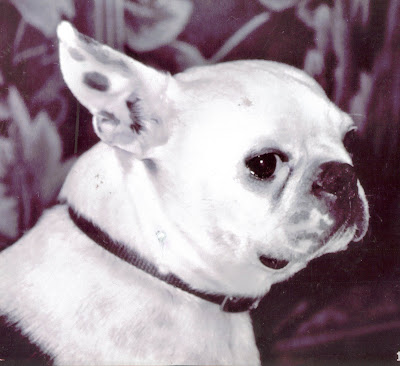 I came home last Thursday. I knew something was amiss. Jimi wasn't at the door barking. The other three were there. I called and heard a muffled bark. i went upstairs and couldn't find him. Back down to the basement, no jimi. Then i finally spot him and he can't see. I think he had a stroke. He could see a day ago, i thought. This blindness came on pretty sudden. I didn't put it together till later when a friend said her dog had a stroke and lost his sight. He's also very tired. But, otherwise normal. Jimi is 11 years old. Bostons live about 15 years. So i wasn't expecting this. We just have to watch him and keep him out of harms way. It's hard for him to be around the others. They are soooo rammy. He snaps at them when they bump him. It's so hard to see your loyal companions fade or deteriorate. Of all the bostons we've had jimi is the most loyal, Where ever i am, Jimi is at my side. When I'm on vacation he sleeps on my pillow till I'm home.
Posted by cconz at 1:20 PM

he sounds like such a sweet dog. maybe after some rest he might recover somewhat. keep us up-dated. our "Dude" went down in the spring.. it's tough to deal with..

Love this pic! Cathy, I'm back! Come visit me - I have lots of new postings to come - also, are you on Facebook - I have gotten into lately!
I love your blog now - still v. interesting! Kartika

Awww,,, it makes you want to protect them all the more. He must just be scared and feeling like he's doesn't know what happened...It is hard to deal with things that are not normal... Thinking of you..

I am so sorry about your little pup. He must be very confused about what has happened to him. I know you will love and protect him!

Oh no. I am so sorry about Jimi - I also have an older dog - 12 - and I always think about how hard it will be to see age take its toll - they become such great friends to us and are so loyal. He is lucky to have you!

What a perfect 'white Wednesday shot' Jimmi would've been...

We worry so about our lil' heathens, we've all been there. I always worry about lil' Scratchy...even as my last nerve is fuming...she's still the love of my life! Gotta love them terriers...right?

Oh Cathy - I am so glad to hear from you! I missed blogging and am glad you are still going strong. Also, thanks for your kind words about the art - I have sold some and do sell in town - have the mask goddesses at a book store, gift shop in town - I am doing something v. different now - will post - I hope Jimi recovers - you know, I had a friend whose Cocker lost her vision in older age and lived a happy life for a number of years - but it is so good the blindness may be temporary. I am having trouble with my blog - when I click on an interest in my profile it will not bring up any blogs! Has that ever happened to you? I will stay in touch!