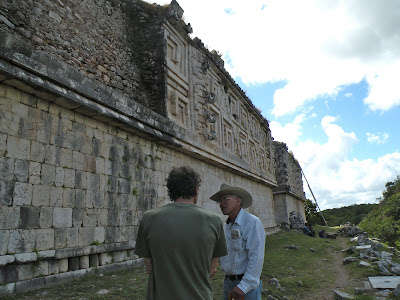 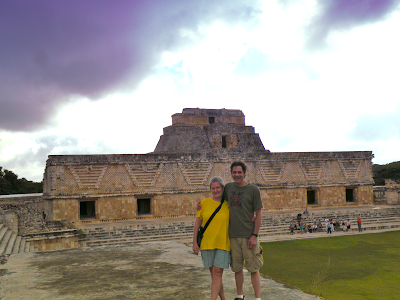 The 1st day at breakfast, we were approached by a man named jorge that said he would be are guide to the ruins. He was worth every cent. He gave a tour the made you feel a part of the mystery . I could just feel the energy that surrounded that place. Bill has always been in tune to things like that. Jorge turned out to be a good friend to have the rest of the trip. He told us he's been a guide for 40 years, spoke 5 languages. All self taught. He said a quide has to be a historian, singer, comedian, photographer,
philosopher.poet. He was all the above. To demonstrate the way sounds amplified in the ball court he belted out a frank sinatra song. He had everybody laughing.
Posted by cconz at 8:58 PM

The Yucatan, ancient and mystical ruins, you and bill, a guide named jorge, and a frank sinatra tune, all sounds pretty natural when it comes to one your outings. Nothing common place when it comes to our cc. – gary

Wow that sounds wonderful ...I would love to see the ruins someday...I would say you hit the jackpot with your guide...he sounded like alot of fun and a wealth of knowledge...lad you had such a great time!!

C'mon Gary get that passport out, the world is waiting.Adventures at every turn. You too Linda, It's not as expensive as you might think. Go for it.