Are They Happy Now 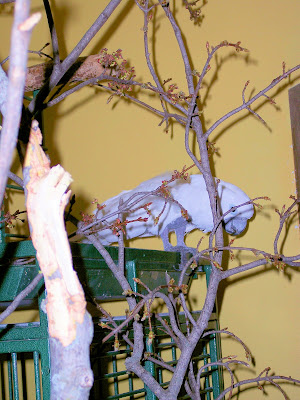 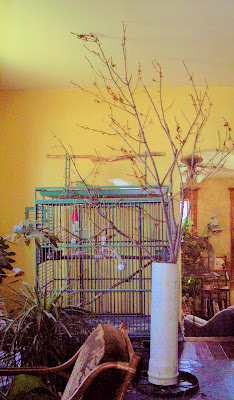 Well, the neighbor chopped down an old maple tree. Guess who made out. Greta and Smiley, that's who. I went out and found some limbs just the right size to bring into the house. They like nothing better than big limbs to chew on, ripping off bark and leaf buds. Leafed out branches are better, but, this will do in a pinch.

We've had both of them for 26 years. We raised the yellow nape Amazon "smiley" from a baby. We hand fed him. Bill and i were raised on bugs bunny cartoons. So smiley can sing all the cartoon songs like "Hooray for Hollywood" and "We were sailing along, on moonlight bay" "Mammy's little baby" "Oh you must have been a beautiful baby" "Happy trails to you" Oh well you get the idea. He calls all the animals, even ones we used to have. He's a real entertainer.

Greta, the umbrella cockatoo, I believe was wild caught, unfortunately. She a very big sweet heart. She is afraid of men. She's very affectionate. But, nothing is safe from that beak, if she's not occupied with something to chew.

She was was full feathered and beautiful till she reached the age of 15. Then she went into breeding mode. She was laying egg after egg. Making nests every second. She was consumed! To make nests, they pull feathers from their chests. She was pulling so often that they just stopped growing back. So she is alittle bald on her chest. She has stopped the nest making and is back to normal. I tell her, she still is beautiful! Bald is beautiful!
Greta honks SOOO loud , that she can be heard all the way down the street.
Posted by cconz at 3:03 PM

We do LOVE OUR BABIES!!! I've had many creatures in my life, many rescued, and I can't begin to tell you the joy they bring to my life, but then, I see you already know. They say a car is an extention of a mans, whatever, so what's this "Baby Truck" say about me? I don't want to know.
'til next time,
Barb C.

Can you imagine what it's like for Gemma down under to have flocks of cockatoo on her veranda...let the games begin.

On her last post she talks about a kookaburra family that followed them to their new home...how cool is that!

Thank you soooo much for the lovely comment! In this business I have a difficult time calling my customers "customers", very quickly they become friends. I spend more time with them than my family, that puts them up pretty high on lifes ladder. I Love my blog, I feel like it's my Daily Diary, and meeting sweet people like you, makes my day! I also LOVE your blog, and what you stand for. Thanks for sharing.
'til next time,
Barb C.